Resources For You > For Wise Stewardship > So, You Want to Know How to Get Rich …

So, You Want to Know How to Get Rich …

It is okay to want to be rich. It is not automatically sinful to have that goal, at least not as long as your heart is right and your reasons are good. In Luke 12 Jesus told the parable of the rich fool. The rich man wasn’t a fool because he was rich, he was a fool because of his attitude towards being money and God.

Luke 12:13-31
13 Someone in the crowd said to him, “Teacher, tell my brother to divide the inheritance with me.”
14 Jesus replied, “Man, who appointed me a judge or an arbiter between you?”
15 Then he said to them, “Watch out! Be on your guard against all kinds of greed; life does not consist in an abundance of possessions.”
16 And he told them this parable: “The ground of a certain rich man yielded an abundant harvest.
17 He thought to himself, ‘What shall I do? I have no place to store my crops.’
18 “Then he said, ‘This is what I’ll do. I will tear down my barns and build bigger ones, and there I will store my surplus grain.
19 And I’ll say to myself, “You have plenty of grain laid up for many years. Take life easy; eat, drink and be merry.”’
20 “But God said to him, ‘You fool! This very night your life will be demanded from you. Then who will get what you have prepared for yourself?’
21 “This is how it will be with whoever stores up things for themselves but is not rich toward God.”

God never said the man was a fool for acquiring wealth or even for relaxing a bit, only for not being rich toward God. Abraham, the father of righteousness was a wealthy man. Lot was as well. It isn’t wealth that is a sin, it is how our hearts embrace wealth that is a sin.

The show “Who Wants to be a Millionaire” became immediately successful because many do want just that. Likewise, for those old enough to remember, the TV show The Millionaire aired from 1955 to 1960 (back when a million dollars was worth many times what it is now). That show was about a multi-millionaire who surprised people by giving away a million dollars to strangers was a hit, likely because many hoped for that knock on their own door. Talk about a dream … 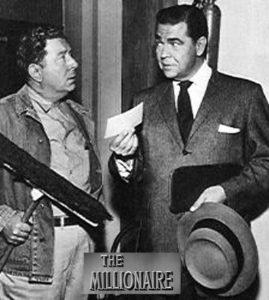 Will you become a millionaire? Maybe. Will the following ideas allow you to approach and maybe even acquire financial freedom? There are no guarantees, but at a minimum, these ideas give you a better opportunity to reach financial freedom. Will the following ideas make you more financially capable? Yes, definitely. How can you reach that goal and how can you avoid the dangers mentioned by the Apostle Paul in 1 Timothy 6? Here are a few ideas.

Let’s start with the first and least obvious.

Proverbs 3:9
9 Honor the LORD with your wealth,
with the firstfruits of all your crops;

Granted the people of Israel hearing this were mostly farmers. Granted they dealt with crops and very few in modern America do unless it is a crop located on a grocery store shelf or bin.

This concept is psychological and designed to overcome human weakness, not designed just for a farming people. It is human nature to want to say, “Let me pay all the bills and give God what is left at the end of the month.” But nowhere in the Bible is there even one iota of support for the idea of giving God leftovers.

In fact, when it was tried, it did not please the Lord.

God knows people better than they know themselves and God certainly knows individuals and their issues with money. Giving to God before spending money on yourself (a different way of saying giving out of the first fruits, see Proverbs 3:9 – “Honor the LORD with your wealth, with the firstfruits of all your crops”) is excellent. In fact, giving to God before saving (a different way of saying giving to yourself with a delay) is even better. That is the way you can give first to God and second to your own future.

Only then, after giving to God and giving to your own future by saving do you give to your present self. This is what is called discipline or delayed gratification. It is also called wise.

Luke 12:15 Tells us, “Watch out! Be on your guard against all kinds of greed; life does not consist in an abundance of possessions.” I will grant you that you may be lonely as a person with this set of priorities. You are putting consumption, keeping up with the Joneses, driving the newest car and watching the biggest and brightest TV a low priority in a status-driven world.

The result is that with no additional effort you will have reached the second rung on this ladder of progress.

Rule 2: Live Beneath Your Means

The average Millennial is saving less than nothing, less than 0% of their income. How? The average Millennial is accumulating debt, not wealth. But if you give first to God and then you next give to your own future before you start spending (and don’t acquire debt), you inevitable will live less costly lives than if you spent all or even more than all of your income.

Here you have to make a number of choices. First, chose what your “needs” really are. Everything else is a “want.” Prepare a budget. Line item 1 is giving to God. Line item 2 is giving to your own future. Line item three and a few lines after that are your needs. Only after those line items are all filled in and money applied to them, do you ever get to your “wants.”

Paul told us in 1 Timothy 6:8, “But if we have food and clothing, we will be content with that.”

Amazingly, if you get to this point, the third rung in the ladder is also an easy one.

Does that mean you can’t buy a home until you can pay cash? No, but you need to be aware of the power a lender has over you. A lender is, quite literally, a slave master over the debtor. Solomon told us in Proverbs 22:7 that “the rich rule over the poor, and the borrower is slave to the lender.”

You will never realize how true that is until you have a mortgage payment due but you lost your job or you lost your income due to an injury and you can’t scrape the money together for a past due payment. The interest and penalties mount up, so does the pressure on you and your family.

If you do have or get a mortgage, keep your giving to God and your future in place, build up savings as well, but make paying off that mortgage a very high priority, very high!

Once again, if you do these 4 steps, the next rung on the ladder is easy – you are already there!

Rule 4: Save for an Emergency Fund

Life is such that emergencies happen. By their very nature, you can’t plan for them specifically, but by the very nature of life, unexpected emergencies will happen. The risk of any one emergency is small. However, over time, it is a certainty that your car will break down, you will have to replace tires or brakes, change oil, your water heater will rust through, a toilet will plug up or the air conditioner will stop – and air conditioners always break in the summer months! That is called life with a little bit of Murphy’s Law blended in.

If you don’t have an emergency fund, here are the risks:

1. You will cheat God that one month. After all, God has enough money to make it through the month;
2. You will break out that unused credit card and charge it, risking paying interest for months.
3. You will borrow from a friend or relative.

All of these are stress-inducing events.

Start with one month’s expenses and work towards six months. This is a step you cannot afford to overlook. When you reach your emergency fund goal, then you keep right on saving, but now it goes into longer term savings, your children’s college savings or your retirement savings. Be as wise as the common ant.

Proverbs 6:6-8
6   Go to the ant, you sluggard;
consider its ways and be wise!
7   It has no commander,
no overseer or ruler,
8   yet it stores its provisions in summer
and gathers its food at harvest.

How can you cut your spending and save enough to do that? Doing exactly that is the next step.

Rule 5: Carry Cash and Not a Credit Card

Carrying a credit card increases spending. No knowledgeable person would disagree. You not only lose the feel of the money leaving your wallet, you also lose the teachable moments for your children as they see that happen. Instead, what do most children see? They see spending without hesitation or consequence.

The envelope system promoted by Dave Ramsey and others is amazing, check it out. Even better, try it for a 3-month trial. I can assure you that you will spend less and end up with more after 3 months.

Proverbs 27:23-27
23   Be sure you know the condition of your flocks,
give careful attention to your herds;
24   for riches do not endure forever,
and a crown is not secure for all generations.
25   When the hay is removed and new growth appears
and the grass from the hills is gathered in,
26   the lambs will provide you with clothing,
and the goats with the price of a field.
27   You will have plenty of goats’ milk to feed your family and to nourish your female servants.

There is nothing easy or automatic about any of this. It is counter-cultural. It is almost un-American. Be a rebel and try it. But know in advance that actions such as budgeting and setting up the envelope system are harder than they sound at first. This leads us to the last step, the final rung on the ladder

Start with a financial management course such as Financial Peace University. The course isn’t hard. With the help you receive from small group facilitators and encouragement from others who are taking the same brave steps you are, the steps to reach the top financially are manageable.

The stewardship ministry of Idlewild Baptist Church in Lutz offers this course twice a year. Try it and you will love the results! Will you get “rich”? Perhaps you won’t be an instant millionaire. However, you will increase your opportunities to reach that million or even more.

Check out It’s Time to Start Saving, 7 Steps for Financial Progress, Planning Your Financial Future And … and Save More, 10% Isn’t Enough for additional ideas on saving money and working toward that first million.