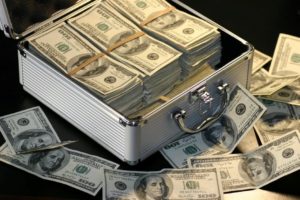 It isn’t hard to figure out where this takes you. How much is enough? I don’t know, but it is always a little bit more than you have. Wealth and financial freedom are “just around the corner.” “I can see the light at the end of the tunnel.” “I’m almost there!” “Just a little bit more!”

Why is this a behavioral reality? It is because people tend to think of money as a goal and not as a tool. If you think of money as a goal, you fall into the “just a little bit more trap.” On the other hand, if you realize that money is a tool, then your focus changes from money to how the tool can be best used. Instead of a little bit more, you focus on what money can (and can’t) accomplish and you can see whether the tool will actually work to help you reach the real goal.

The sad truth is that money doesn’t solve behavioral problems. If a person has a lot of consumer debt, the problem is not lack of money; it is lack of discipline with the money he or she has. Give that person more money and it will be spent. The proof is in the numbers. In 2018, the savings rate is averaging close to a miserably low 3% of income.

There is a sarcastically written but fascinating behavioral principle know as Parkinson’s Law. In 1955 Cyril Parkinson wrote in The Economist that “work expands so as to fill the time available for its completion.” Readers loved and ultimately expanded on the idea. One of the later corollaries of Parkinson’s Law is “expenses rise so as to meet income.” That is sometimes referred to as Parkinson’s Second Law. While those “laws” were written in a humorous sense, there is a painful truth to Parkinson’s Second Law about income and expenses.

Stated differently, Parkinson’s Second Law in the current United States would probably be that “debt rises so that monthly expenses, including debt repayment, consume income.” If most people make more, they spend more, often even more than their income.

Therefore, money doesn’t solve the behavioral problem; it can’t. Instead, the answer lies in self-honesty, perhaps in counseling, and in having a plan.

What kind of a plan? One of the best plans for people of any age seeking to be financially free was set out by authors Greg Baumer and John Cortines. The two men are very different in their self-identified “money mindsets.” One started as a spender and the other as a saver. Together they recognized the flaws in their money mindsets and realized that God has called them, and all believers, to be servants rather than savers or spenders.

They studied the Bible and traced how God has given us guidance to find the right way to handle money. Early in their lives, they established a personal “finish line,” a maximum amount to spend regardless of income, an accountability system to encourage sticking with it, and what they call a Board of Directors for Life of friends. They wrote how this came about in their excellent book, God and Money: How We Discovered True Riches at Harvard Business School. 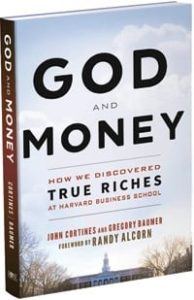 Does this approach make sense in the real world? Of course it does. Think of the lottery winners who spent themselves into financial destruction in only a few years. Think of those, including sports stars, actors, business successes, making hundreds of thousands or even millions of dollars a year, who end up broke. It isn’t the amount of money, it is the heart of the person towards God and money.

If you want to learn more, invest in a copy of God and Money, take the time to seriously consider your own money mindset and begin the process of self-reflection on how you would answer the following questions:

Does your spending reflect your faith?

Do your credit card statements and your bank statements show a focus on self or on the kingdom of God?

If God were to ask you how you are investing in His kingdom, would He say, “Well done, good and faithful servant” after hearing your answer?