Cleaning up the Business of the Church #3

Lessons learned from the Life of Jesus – Caesar’s Coin

There is an old, old cartoon character that this Bible story always brings back to my mind; he is the ultimate villain and his name is Snidely Whiplash. His classic line as he failed – and failed – and failed to defeat his arch-enemy, Dudley Do-Right, was, “Curses! Foiled again!” 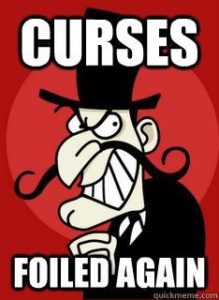 There were times when the political and religious leaders of Jerusalem must have felt like Snidely Whiplash as they tried to trick Jesus. Mark 12:13-17 was one of those times.

Mark 12:13-17
13  Later they sent some of the Pharisees and Herodians to Jesus to catch him in his words.
14  They came to him and said, “Teacher, we know that you are a man of integrity. You aren’t swayed by others, because you pay no attention to who they are; but you teach the way of God in accordance with the truth. Is it right to pay the imperial tax to Caesar or not?
15  Should we pay or shouldn’t we?”
But Jesus knew their hypocrisy. “Why are you trying to trap me?” he asked. “Bring me a denarius and let me look at it.”
16  They brought the coin, and he asked them, “Whose image is this? And whose inscription?”
“Caesar’s,” they replied.
17  Then Jesus said to them, “Give back to Caesar what is Caesar’s and to God what is God’s.”
And they were amazed at him.

On its face, this story appears to be relatively simple and direct, but it isn’t that simple. Part of the complexity comes from our often-simplistic view of the Pharisees as bad men. Some were. However, the Pharisees were a group of religious men who worked to strengthen and even reform Judaism as it struggled with the influence of the Greek and Roman civilizations upon Israel and the Jewish people. Realistic comparisons would include the cultural changes faced by people groups who see rapid influxes of western civilization and face rapid change, nations invaded and occupied by other nations, and even our culture today as it is rapidly changing with the “invasion” of technological advances.

As the old forms changed, many doubtlessly saw their civilization and way of life to be under attack. It was! The Pharisees sided with the poor Jews against the Roman occupation. They also opposed those Jews who collaborated with Rome.

The Pharisees developed rabbinic Judaism and many were extremely legalistic. Those are the Pharisees the gospel writers commented on so often. But there was actually a less strict school of thought among some Pharisees, the followers of Hillel, who opposed the radical exclusiveness of the stricter followers of Shammai. See Who Were the Pharisees? for more detail.

The Pharisees opposed Roman coinage because those coins had Caesar’s image on them. That image added the inscription “Divus“, meaning “god.” A Jew calling a Roman emperor a god committed an act of idolatry, punishable under Jewish law by death. Merely using a Roman coin could be considered idolatry under Jewish law and was not allowed. The trap for Jesus lay in the fact that using a coin addressing Caesar as a god to pay taxes to that same god was a serious offence under Jewish law – but saying a Jew should not pay taxes was a serious offense under Roman law. They thought they had Jesus trapped. He had to either offend the people and advocate violating Jewish law or He was going to commit an act of rebellion against Rome.

Jesus’s answer to give to give Caesar that which is his (Caesar’s) was excellent. But what about the rest of His answer? Very little attention is paid to the second half of Jesus’ response, and it may be the most important part. In fact, the second part of Jesus’ answer was so good that it left the Pharisees no where to go except home, thinking, “Curses! Foiled again!”

If Jesus was saying what I believe He intended, and I am sure He intended this meaning, then there is a close connection between His double reference – give to Caesar what is his and to God what is His.

In other words, Jesus was saying the money is Caesar’s so give it to Caesar and the Jews belong to God and have God’s image graven on them, so they are to be committed and given to God. Each Pharisee listening could not disagree with that statement by Jesus. It is directly from the Torah and was a direct call to each of them to submit himself to God.

I also see that Jesus didn’t directly answer the question about paying taxes. Instead, as He often did, He used their challenge to Him as a teaching moment and addressed something far more important than money. Jesus told them what they really needed to spend their time on was giving themselves to God, who had made them in His image.

Even better, there is another lesson in this story. Perhaps even more importantly, while facing persecution in the form of a verbal attack, Jesus found a way to answer a dangerous political question with a spiritual point that was far more profound. That is a skill many Christians and the church lack. Of course, it is self-evident that Jesus would have a Biblical world view. What is problematic is that many publicly professing Christians do not. According to Barna Research, surprisingly few evangelical Christians have a Christian or Biblical world view. For more details on the movement of Christians away from a Biblical worldview, see Competing Worldviews Influence Today’s Christians.

Many past and present disputes between the government and the Christians show the Christians taking viewpoints, approaches and defenses lacking any semblance of a Biblical world view. That should hardly be surprising given that God and any meaningful mention of God in public education has been gone for over 50 years. Additionally, increasingly in the public arena, people are afraid to mention anything spiritual or take any public Biblical position. Quite literally, their work, livelihoods, and even their lives have been proven to be at risk. See Undeniable: The Survey of Hostility to Religion in America.

The real question is how to respond to an atmosphere of constant and occasionally life-threatening persecution. Americans are not used to that, but many around the world and certainly many in Biblical times and the years following have lived in that type of environment. See the “hall of faith”, Hebrews 11:4-40.

In fact, the protection the American church and American Christians have had from persecution is unnatural and abnormal.

2 Timothy 3:12
12  In fact, everyone who wants to live a godly life in Christ Jesus will be persecuted,

John 15:20
20  Remember what I told you: ‘A servant is not greater than his master.’ If they persecuted me, they will persecute you also. If they obeyed my teaching, they will obey yours also.

John 16:33
33  “I have told you these things, so that in me you may have peace. In this world you will have trouble. But take heart! I have overcome the world.”

James 1:2-4
2  Consider it pure joy, my brothers and sisters, whenever you face trials of many kinds,
3  because you know that the testing of your faith produces perseverance.
4  Let perseverance finish its work so that you may be mature and complete, not lacking anything.

Persecution and trials will come. Given the current political and social status of America, persecution and trials appear to be a lot closer and arriving a lot faster than anyone might have thought 30 or even 20 years ago. Those who hate Jesus and their concept of Him and His message are increasingly common, active, and outspoken. So, the question remains, how do we as Christians (and how does the church) respond to persecution and attempt to cause harm?

Is the response to “turn the other cheek” and accept the persecution? Matthew 5:39.

Matthew 5:11-12
11  “Blessed are you when people insult you, persecute you and falsely say all kinds of evil against you because of me.
12 Rejoice and be glad, because great is your reward in heaven, for in the same way they persecuted the prophets who were before you.

Is the response to oppose persecution with lawsuits? As a retired attorney, I am reluctant to even imply that the court system may not be the best way to solve disputes, but I have to be mindful of Jesus saying the following:

I can also say I have personally watched the legal system fall short of a just result on a few occasions. However, is the response to religious persecution physical opposition, perhaps even violence? That is easier to answer. No! It is impossible to reconcile the Word of God with violence except in self-defense. See The Biblical View of Self Defense.

Regardless of whether the attack is upon a person or the church as a whole, I suggest starting with prayer and reflection upon the Bible and the many lessons God has given us. I have found that by pausing and reflecting back on how Jesus responded to attacks upon Him helps my composure and my confidence. Paul was constantly under attack and wrote of his defenses to his protégé, Timothy, saying:

2 Timothy 1:13-14
13  What you heard from me, keep as the pattern of sound teaching, with faith and love in Christ Jesus.
14  Guard the good deposit that was entrusted to you—guard it with the help of the Holy Spirit who lives in us.

Aim for a response that guards what we have been entrusted with by God.

Second, know that you are defending the faith and that the message of God should be presented, gently and respectfully. See 2 Timothy 2:25-26 and 1 Peter 4:10-11.

1 Peter 3:15
15  But in your hearts revere Christ as Lord. Always be prepared to give an answer to everyone who asks you to give the reason for the hope that you have. But do this with gentleness and respect,
16  keeping a clear conscience, so that those who speak maliciously against your good behavior in Christ may be ashamed of their slander.

Finally, whatever you do, keep your witness secure. We remain a light in a dark work. Matthew 5:14-16. This can be illustrated several different ways. Do not lose the war for the sake of winning one battle. Keep your eyes on the real prize. Keep the main thing the main thing. The best way to say it is, “fix your eyes upon Jesus …” Hebrews 12:2.

And keep this wise advice in mind:

Hebrews 13:6
6  So we say with confidence,
“The Lord is my helper; I will not be afraid.
What can mere mortals do to me?”

A person’s response to an attack of persecution is personal, a reflection of where they are in their walk with Christ and their relationship with God. With God’s help, those who attempt to attack the church and attack believers will face a Godly response, whatever prayer shows the right response to be – with the result that the persecution efforts backfire and the persecutor is left with the Snidely Whiplash response, “Curses! Foiled again!”

This is the third in a series of articles on financial and other issues facing the American church in this no longer very new millennium. These articles represent the personal thoughts and reflections of the author and are not necessarily a statement of The Idlewild Foundation. These articles are based upon parables told by Jesus and stories from the gospels on events in His life, applying His life and teachings to the lives of believers and to the church as a whole and not to any one church in particular.