Cleaning up the Business of the Church #14

Lessons learned from the Parable of the Tares

There is a basic truth about church – a basic truth that applies to just about every aspect of relationship and social life; even though people who are very different are in the same organization or church, their reason for being there may be entirely different. The parable of the tares adds a troublesome dimension to our understanding of church membership and life – some of the members may not be what they appear to be.

Matthew 13:24-30
24  Jesus told them another parable: “The kingdom of heaven is like a man who sowed good seed in his field.
25  But while everyone was sleeping, his enemy came and sowed weeds among the wheat, and went away.
26  When the wheat sprouted and formed heads, then the weeds also appeared.
27  “The owner’s servants came to him and said, ‘Sir, didn’t you sow good seed in your field? Where then did the weeds come from?’
28  “‘An enemy did this,’ he replied.
“The servants asked him, ‘Do you want us to go and pull them up?’
29  “‘No,’ he answered, ‘because while you are pulling the weeds, you may uproot the wheat with them.
30  Let both grow together until the harvest. At that time I will tell the harvesters: First collect the weeds and tie them in bundles to be burned; then gather the wheat and bring it into my barn.’”

A tare is a plant that commonly grows in fields of grain. It is named Lolium temulentum, known as darnel, and is a species of rye-grass. The seeds of the tare are a strong soporific poison, a poison that induces sleep and can cause convulsions and even death if it is infected with a common mold. It looks remarkably like wheat and is distinguishable from wheat only when the ear appears. On the left is the wheat and on the right are the tares. 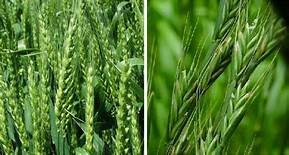 Darnel grows in the Middle East. It is sorted from wheat at the time of harvest.

There is a good reason why the gathering of new people to faith is Christ is referred to as a harvesting process. In Matthew 9:37-38 Jesus used that word in the context of evangelization.

Matthew 9:37-38
37  Then he said to his disciples, “The harvest is plentiful but the workers are few.
38  Ask the Lord of the harvest, therefore, to send out workers into his harvest field.”

In harvesting wheat, it is necessary to separate the darnel, the tares, from the wheat. That is exactly what this parable of the tares is about. Jesus gave us an explanation for the parable:

Matthew 13:36-43
36  Then he left the crowd and went into the house. His disciples came to him and said, “Explain to us the parable of the weeds in the field.”
37  He answered, “The one who sowed the good seed is the Son of Man.
38  The field is the world, and the good seed stands for the people of the kingdom. The weeds are the people of the evil one,
39  and the enemy who sows them is the devil. The harvest is the end of the age, and the harvesters are angels.
40  “As the weeds are pulled up and burned in the fire, so it will be at the end of the age.
41  The Son of Man will send out his angels, and they will weed out of his kingdom everything that causes sin and all who do evil.
42  They will throw them into the blazing furnace, where there will be weeping and gnashing of teeth.
43  Then the righteous will shine like the sun in the kingdom of their Father. Whoever has ears, let them hear.

The explanation makes the parable easy to understand and apply. There is a wheat field, the whole earth. God is the farmer and we are blessed with the opportunity to live during harvest time.

But there is a problem; there is an enemy who would love to ruin the farmer’s harvest. He has planted people in the church who look deceptively like believers. He also attacks those who are believers, hoping to make them falter and fail, and damage both them, the church, and nonbelievers who are watching the church. In the end, it matters not since the Lord can tell the difference. He knows those who are His people. 2 Timothy 2:19.

But that is not always the case for us, and that is where the lesson lies for the church and believers.

Have you ever watched a believer drift from being a loyal disciple and follower to something else, someone you hardly even know? If you have been in a church for a while, you have had it happen around you. Sometimes it is a person who becomes unhappy about someone else in the church, whether a Pastor, a staff member or another member. The complaining and off-color statements begin and it almost appears that the purpose of any conversation about the church is to discuss that other person or to degrade the church.

Or it may be a person who was once faithful and regular, but no longer can find the time for God – the pressures of life or the temptations of sin are just too great. They come occasionally to church, but it isn’t the same.

Or maybe it is something else, but the idea is the same. The person may look the same and still claim a membership in the church. To the outsider, that person looks the same as all the rest of the church members. But they are different; they have become a tare in a wheat field.

What does the church do and what should the church do are, unfortunately, often two different things. The message of Jesus here is clearly against harsh judgmentalism and sudden action.

A church must be patient with those who have bad stretches of time and wander. Many of those who drift a bit are hurting for one reason or another. They deserve to be treated with kindness, gentleness, and love. God knows the heart, which is something we are not very good at, and Jesus is telling us to move slowly and let Him sort out the wheat from the tares.

One difficulty with the fact that wheat and tares look the same is that they also act very much the same. They start from a small kernel, or seed, they sprout very much the same, and as they grow, they are almost identical. Then when the head or spike of grain appears, it becomes possible to tell the difference. But by then the roots are intertwined and uprooting the tares inevitably damages the wheat.

But analogies like this are always dangerous because rarely are plants and people that similar in all ways. The essential difference that further supports the idea of loving patience is that while tares never become wheat, people can change. They may start as a tare and behave like a tare for years, but God has a way of doing the impossible, turning tares into wheat.

We need to stay out of God’s way and let Him do His work and not try to do it for Him. That does not mean when we see a problem that we do nothing, but it is important for the church to move slowly, deliberately, and with compassion because pulling up the tares can damage many wheat plants.

Why wait? We should move slowly and wait because God’s judgment at the end will be perfect, whereas when we go through the field pulling up the tares, much wheat will be lost. God always judges righteously and in His time.

However, there is a balance that can be hard to figure at times. Sometimes the tares are not only obvious but damaging to the wheat. When should the tares be removed? How soon is too soon (or too late) and how harsh an action is too harsh is a difficult judgment call requiring prayer and counsel.

Jesus was not suggesting that the church should take no action regarding those who are tares, who openly rebel against the Word of God. If there is open sin and rebellion, the Bible teaches that they should be instructed first. If they remain unrepentant after heartfelt efforts then those who openly sin and reject God’s guidance should be turned away. See Matthew 18:15–18, Romans 16:17, and Titus 3:10-11. This is an action to be taken slowly, after much prayer and counsel, and only in love, not in harsh judgmental.

The lessons of this parable are valuable for all believers and for the church. Be patient, loving and compassionate and the harvest will be greater. Mercy triumphs over judgment. James 2:13.

This is the fourteenth in a series of articles on financial and other issues facing the American church in this no longer very new millennium. These articles represent the personal thoughts and reflections of the author and are not necessarily a statement of The Idlewild Foundation. These articles are based upon parables told by Jesus and stories from the gospels on events in His life, applying His life and teachings to the lives of believers and to the church as a whole and not to any one church in particular.