Cleaning up the Business of the Church #12

Lessons learned from the Parable of the Leaven

Not that many people make their own bread now, and this parable almost reads more like a cooking lesson than a spiritual lesson. Making bread isn’t that hard, at least so the online recipes say. For example:

Pour ¾ cup warm water in a large bowl.
Slowly stir in the dry yeast, stirring continuously until all of the yeast is dissolved.
Add the salt, sugar, shortening, and milk to the bowl and stir until all ingredients are thoroughly mixed.
Next, mix in the 2 cups of flour.
The mix may not need more flour, but if it is thin, add more flour, one tablespoon at a time, until the dough chases the spoon around the bowl.
Kneed the bread and wait for the bread to rise.
Put the dough out on a floured board and knead.
If needed, add a few small spoonfuls of flour, one at a time, until the dough is soft, smooth and not sticky to your touch.
Lay the dough in a greased or buttered bowl. After a minute, turn the dough over so that only the top of dough is greased.
Cover and let the dough rise in a warm and draft-free spot for about 1 hour.
The dough will have risen, so punch it down some so that it regains a loaf shape.
Put the bread onto a floured board and knead additional time.
While you are doing that, preheat oven to 375 F.
Shape the dough into a loaf and set it in buttered bread pan.
Cover the bread pan and before putting it in the over, let the bread rise for about 30 minutes.
Cut three slashes across the top of the loaf with a sharp knife.
Brush loaves with milk before baking to produce a dark, shiny crust.
Brush loaves with egg white before baking to produce a shiny crust.
Spraying loaves with water while they bake will produce a crispy crust.
Place the loaf in the oven and bake it for about 45 minutes or until golden brown.
Finally, you can brush the loaves with butter immediately after baking to produce a soft crust. 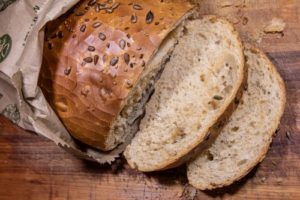 But the point is not the bread. Instead, the point of this parable is another simile giving people another image of the kingdom of heaven.

Matthew 13:33
33  He told them still another parable: “The kingdom of heaven is like yeast that a woman took and mixed into about sixty pounds of flour until it worked all through the dough.”

See also Luke 13:20-21. That is a recipe that is less technical or detailed – and it is for a lot of bread! But it isn’t really about bread. In the parable of the mustard seed (Matthew 13:31-32), Jesus said that the church would begin small and satan would attack it from within. Immediately after that parable is the parable of the leaven. In this parable, Jesus warns of one of satan’s methods of attack, his efforts to damage or destroy God’s Word through distortion.

The making of bread is relatively rare in homes, so the meaning of this parable is lost on most readers, as is the warning built into the words of Jesus. Most Jewish listeners would be familiar enough with flour, leaven and Jewish theology to understand instantly what Jesus was saying to them.

Leaven is old dough, but it is special old dough. It is highly fermented and contains yeast that, when mixed all the way through the dough, will affect all of it biologically. Paul used this same word picture in his letter to the troubled church in Galatia which was allowing false doctrine to poison its message.

Galatians 5:7-9
7  You were running a good race. Who cut in on you to keep you from obeying the truth?
8  That kind of persuasion does not come from the one who calls you.
9  “A little yeast works through the whole batch of dough.”

In both the Old and New Testaments, leaven always represents sin and evil. No offering could contain any leaven. See Leviticus 2:5 and Amos 4:5. Jesus uses leaven in referring to the evil doctrine of the Pharisees and the Sadducees. See Matthew 16:5-12 and Mark 8:14-21.

1 Corinthians 5:6-8 shows Paul giving leaven the same meaning as he addressed the sins of one of the members of the church of Corinth and their own sin of pride. In that context, the idea of a little sin and evil “working its way through the whole” church becomes a compelling warning.

Since the bread is the church symbolically, it isn’t hard to picture sin working its way through a church, invisible until it has infected so much of the church that there is change – and not for the better.

Thus, leaven is symbolic of anything that corrupts the church, whether sin or doctrinal distortion. The leaven of the Pharisees was their hypocrisy. They looked righteous but their external appearance covered hearts that were impure. Matthew 23:25-32. The Sadducees doubted and rejected all of God’s Word after Deuteronomy. Their lack of belief and aloofness was deeply troubling to Jesus.

There is a detail in this parable that is invisible in the NIV translation. The more accurate translation is the NASB which is:

Matthew 13:33
33  He spoke another parable to them, “The kingdom of heaven is like leaven, which a woman took and hid in three pecks of flour until it was all leavened.”

The critical difference is not the translation of the quantity, but the fact that the woman “hid” the leaven in the dough. The Hebrew word translated as “hid” is also translated as “conceal,” making the woman an agent of evil. That is certainly not a reference to all women and it certainly does not exclude men from introducing and concealing evil and sin within the church. The point isn’t the gender of the person doing the hiding, but the fact that people are actively concealing sin within the church.

There is another detail of this parable that would have been obvious to a knowledgeable Jew, but is invisible to modern peoples. What is translated as 60 pounds of dough is actually three measures of meal, an amount which would probably weigh about that much. It is unlikely that Jesus used that number meaning anything other than the three measures of a meal or grain offering such as in Leviticus 2:5. That offering could never contain leaven, hence the concealment of the leaven in the bread by the woman. That would ruin the bread for use as an offering as it would be an offering to God permeated by sin and evil. Her hiding of the sin is more serious than is readily apparent; it is hiding the sin in the church from the church.

The answer for the church in this lesson is hard. God’s kingdom here on earth, the church, can be ruined by hidden sin, especially sin that is woven into the church itself. The church must always be vigilant at all levels, from Pastors and lay leaders to all members, to search out hidden sin and not allow it to be mixed with all of the church membership. This may mean removal of unrepentant sinning members, a hard action to take since all sinners certainly need God’s grace. In Matthew 18:15-19, Jesus gave us a model for disciplinary action within a fellowship, a model that ends with removal from fellowship if repentance does not result.

The Matthew 18 model is a hard one to follow in the modern church. In a small house church of a few dozen believers at most, it was relatively easy to get the entire church together. When the church numbers in the hundreds, how many have to be there for it to be “the church”? If there is more than one Sunday morning service, which one or both is “the church”? And then there are the lawyers and a legal system in an overly litigious society that turn any accusation into a Supreme Court case, and an expensive one at that.

But then Jesus never said following Him would be easy, did He?

May God bless you as you work to reach the lost but also keep the saved from losing sight of the truth. 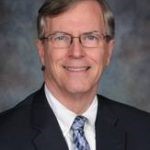 This is the twelfth in a series of articles on financial and other issues facing the American church in this no longer very new millennium. These articles represent the personal thoughts and reflections of the author and are not necessarily a statement of The Idlewild Foundation. These articles are based upon parables told by Jesus and stories from the gospels on events in His life, applying His life and teachings to the lives of believers and to the church as a whole and not to any one church in particular.