As always, how you define “winning” will determine not only how you can win the game of dealing with money and finances in our world, but even whether it is possible for you to win that game. If your definition of winning is to become unspeakably wealthy, while it may be possible, it is highly unlikely and probably not worth the long-term cost. If you define winning more realistically, it may be possible.

It is all about choices and ultimately, choices are determined by priorities.

So, start with one simple question, “What is your top priority in life?”

Once you have that question answered, many of the rest of the difficulties in life align themselves. Let me suggest an answer to that question. More accurately, let the Apostle Paul give you the answer.

If you settle on that answer, most other issues in life fall into place because God’s Word has given us many commands, instructions, and recommendations for the other decisions of life. After that one question and answer about your top priority is settled, the only remaining question is whether you will obey God.

So, let’s look at how our finances align themselves once we put God as our top priority.

1. We will see that we are not owners, only managers

This is both Biblical and logical in the eyes of the world. The standing joke is that there are no U-Hauls following hearses. That may be a joke but it is also true; you just can’t take it with you. When you die, you will leave everything to either your heirs, your charity of choice, or the IRS.

Rather than being an owner, you are a steward or a manager of the things God has given you. He is the owner. Psalm 24:1. As stewards we remain managers over His creation and His people. God put us in that role back in Genesis 1:26-28 when He declared that we were to be fruitful, multiply, and subdue the earth. Then, after the fall, Adam was told that he was destined to work the land. We have been working ever since.

Our stewardship comes both naturally from the fact that we are in a world created by and belonging to God and from the role described for us Biblically. 1 Corinthians 3:9 describes our relationship working alongside God. We are fellow workers, co-laborers, with God.

Paul used the Greek word for stewardship, oikonomos, in addressing his role in preaching the gospel. 1 Corinthians 9:17. Paul describes his calling as the discharging of a trust, which is stewardship. Elsewhere Paul also describes his role as the administration of the grace God had given to him. Ephesians 3:2. Paul is placing God in the role of the master who has delegated some management responsibilities to Paul. Paul holds the role of being the manager – the steward – of what God has given to him. Paul understood his role; do you?

You should understand your role because God has made it clear. Many passages and parables reaffirm that role; we are stewards of God’s grace toward us.

2. We will honor God with the first of our earnings

The common Old Testament phrase for honoring God with the first of our earnings is that we are to give Him our firstfruits. See, for example, Exodus 23:19 and Leviticus 2:12.

The practical truth is that someone will receive the firstfruits of your labor. It may be a creditor, a family member or even you, yourself. Instead, it should be an offering to the Lord for all He has given to you.

Even if you are convinced that you cannot give to the Lord, He has an answer for that thought. His answer is a challenge back to you.

Malachi 3:10
10  Bring the whole tithe into the storehouse, that there may be food in my house. Test me in this,” says the LORD Almighty, “and see if I will not throw open the floodgates of heaven and pour out so much blessing that there will not be room enough to store it.

“Try it, you’ll like it.” God has dared us to test His promise. That is a fair offer. Try it with sincerity of heart and see if God doesn’t come through with blessings.

3. We will plan for and respect the future

After more than 60 years of life, I have learned some things. I have certainly fallen short many times in knowing what I needed, but one fact I have learned well is that the future is coming. It may seem a long way off, but it is still coming.

That means you need to start saving now. The harsh realities of compound mathematics also make it important for you to start saving as soon as possible, at the earliest possible age. See 8 Financial Moves to Make in Your 20’s for the incredible way compound interest can impact your savings. Start now and save a little. The minute you think you cannot save any more, read Ideas for Living Better Through Stewardship for a few new ideas that might help you save a little more. 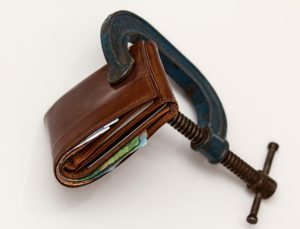 One of the key ideas is for you to start budgeting. Without budgeting you will, at best, struggle to be prepared for expenses as they sneak up on you. The process of creating a fully accurate budget requires enough effort that you will rarely be surprised by bills (except for emergencies). The process of maintaining that budget will keep it on track and make you more able to see where your money is going and where you can reduce expenses.

Another key idea is for you to spend cash and not use your credit card, not even if you always pay the bill early each and every month. Why? Because people spend more money day after day with credit cards than with actual money. There is something about the act of handing over dollar bills that makes the purchase seem a bit harder, and that makes a large purchase a lot more difficult. See Do It The Easy Way And Pay.

The future is coming and the time to prepare is now. The old saying that the best time to plant a shade tree is 40 years ago and that the second best time is right now fits the idea of saving. Start now!

4. We will work diligently

Colossians 3:23-24
23  Whatever you do, work at it with all your heart, as working for the Lord, not for human masters,
24  since you know that you will receive an inheritance from the Lord as a reward. It is the Lord Christ you are serving. 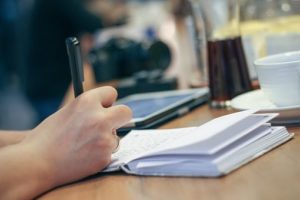 “Whatever you do” includes your vocation and “all your heart” means just that. Be passionate about your work because ultimately it is the Lord you are serving. This point was expressed with excellence by Martin Luther King, Jr. when he said,

If you are unable to do that and think your job is beneath you, then you have two Godly alternatives; find a better job or a develop a better attitude. Staying miserable about a job where you spend many hours every week is hardly an option to consider.

5. We will work toward being debt-free and towards a state of being financially free

The saying that we should be neither a borrower nor a lender is not directly from the Bible but there is an element of Biblical truth to it. It actually comes from Shakespeare’s Hamlet, Act 1, scene 3, line 75. Regardless of the source, it is good advice. The borrower is a slave to the lender, Proverbs 22:7, and certainly no one wants to be a slave. Likewise, no one should want to be a slave master either.

It is almost impossible to avoid all debt in our modern economy, especially in the purchase of a home, but your goal should always be to get out of debt as quickly as possible. See The Disaster of Debt, Getting Out of Debt, and 8 Moves to Make in Your 20’s (read it even if you are older than 20).

But is it enough to just be out of debt? No. You need savings to protect against falling back into debt in the event of an emergency or surprise large expense. Again, see 8 Moves to Make in Your 20’s and other resources on the website of The Idlewild Foundation. As already noted, the future is coming and you need to plan and prepare for retirement, college expenses for children, medical needs, etc. You are never too young to start those preparations. However, your goal is not financial independence.

1 Timothy 6:6-10
6  But godliness with contentment is great gain.
7  For we brought nothing into the world, and we can take nothing out of it.
8  But if we have food and clothing, we will be content with that.
9  Those who want to get rich fall into temptation and a trap and into many foolish and harmful desires that plunge people into ruin and destruction.
10  For the love of money is a root of all kinds of evil. Some people, eager for money, have wandered from the faith and pierced themselves with many griefs.

That is a lot. But there are many ways to receive assistance and guidance throughout the long process of growing financially. Take a Financial Peace University course at Idlewild Church. It includes guidance and help with budgeting, paying off debt and many of the issues raised in this article. Alternatively, try Crown Ministries. Crown’s Money Map can get you started toward becoming financially free. It is free. And Crown Money Map offers help with all aspects of growing financially free. Download yours today.

6. We will live that same life at home with our spouses, children, relatives, neighbors and friends

The way children learn is amazing. One of the funniest and most honest videos I have ever seen on YouTube is the video of two babies learning to sneeze – by copying their father! The father sneezed, then the babies started copying him, sneezing repeatedly, over and over and over, smiling because they had learned how to do something daddy does! It was on YouTube for years but has unfortunately been taken down.

And that is how most young children learn – by copying their parents. Unfortunately, many parents don’t realize that their little children are at times learning a few bad practices by observation. They are also seeing that what some parents say at church and in the public are different than how they really live. One of the damaging truths is that many young adults turn away from the church because they saw their parents at home and at church – and the difference was enough to cause them to label their parents and the church as hypocritical.

Jesus made His lack of patience with hypocrites clear. Be who you say you are – always.

7. We will become generous with God and His creation

When you look closely at life and see all that God has done for you – think John 3:16 – and you realize that the eternity that lies ahead will be even greater, it is easy to realize just how blessed you are.

Do you love God? Really? That old saying “you can give without loving but you cannot love without giving” is true. He has given so much out of His love. We were all made in His image, and so we should be strongly inclined to be generous in response. See our Resources for Giving Generously, Joyfully and Wisely.

For many, finances will be a lifelong struggle. Just know that there are many people who would help if you asked. The Idlewild Foundation is here if you will call. (813) 264-8713.